Black Diarrhea - Should I Go to ER?

"Is one episode of black diarrhea something to be concerned about?"  "Is it serious?" The answer in most cases is yes. The biggest cause of black, tar like, loose stools or melena as medical people call it is bleeding from the upper gastrointestinal tract. This is dangerous and can be life threatening. Between 6% and 13% of cases lead to death.

Black feces can be caused by certain medicines and foods like iron tablets and seafood ink (false melena) but if you have diarrhea which is black, tarry and sticky, the most likely cause is your own blood.

This type of bowel movement will also have a very characteristic strong smell which is almost metallic, due to the hemoglobin in it which contains iron.

Bleeding from the upper gastrointestinal tract (the gullet/esophagus, stomach and first part of the small intestine) is four times more likely than from lower down and this is the bleeding which causes black diarrhea.

If this happens to you, you will be scared and will probably be asking yourself  " why is my diarrhea black ? " but read on to find out what the cause might be and what action to take. 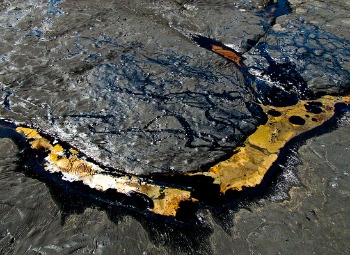 Why is the Blood Black?

As blood moves down through the intestinal tract enzymes start to digest it and this is why it turns from the bright red color of normal blood, to the black of partly digested blood.

This normally only happens when the blood has been in transit for some time and so points to bleeding higher up in the gastrointestinal system.

This is why if you are bleeding in the esophagus, the stomach or the small intestine you may have black diarrhea.

In rare cases the blood could be coming from lower down, if the bowels are functioning very slowly.

What Causes the Bleeding Leading to Black Diarrhea ?

There are many different things that can cause the bleeding that leads to black tarry diarrhea. The most common causes are peptic ulcers and varices (dilated veins in the esophagus or stomach).

Peptic ulcers occur in the stomach and the duodenum (the first part of the small intestine). They can cause erosion of large blood vessels leading to hemorrhage.

Most of these ulcers are caused by an infection with Helicobacter pylori.

This can be treated with medication to reduce the production of acid in the stomach and a course of antibiotics. However, any bleeding point must be found and stopped first.

Varices are associated with chronic liver disease. These dilated veins can rupture and cause severe life threatening bleeding.

Other black diarrhea causes from bleeding can include:

What Should I Do If I Have Black Diarrhea ?

If there are no other reasons for your black diarrhea such as eating lots of false melena causing things then you should get medical attention quickly. Either go to ER or if you have other symptoms call an ambulance.

If you are bleeding then the quicker you receive treatment the higher your chance of having a good outcome.

What Other Symptoms Can Signal Bleeding?

If you are bleeding profusely then you can go into shock. This is when there is not enough blood circulating to keep your normal body systems working properly.

You may feel faint or dizzy, with pale, cold and clammy skin. You could have rapid breathing, a racing heart and even chest pain.  You could feel confused or agitated, and you could even lose consciousness.

If you have any of these symptoms alongside your black diarrhea then you need to summon help urgently and you should lie flat and call 911 in the USA, 999 in the UK or the number in your area. You can elevate your legs if you do not have any injuries. Do not drink anything.

What Will Happen When I Get to the Hospital?

When you get to ER they will take a history as usual but they will principally be trying to work out how much blood you have lost and then they will look for the underlying cause of your problem and any related problem. For example people with cancer are more likely to have ulcers.

You will be put on a drip immediately and given replacement fluids. If your hemoglobin levels are low and you have signs of shock then you will be given a blood transfusion or plasma.

The main test that you will have is an endoscopy which is done under sedation. This means that a camera will be introduced into your gastrointestinal tract to look for the source of the bleeding that is causing your black diarrhea.

In patients who are unstable this will be done immediately and other people should have this test within 24 hours. Sometimes an angiogram (a special x-ray which looks at blood vessels) is used where endoscopy fails to find the bleeding point.

Other tests will include blood tests, x-rays and scans.

Often the bleeding from an ulcer or caused by other things like medications can be stopped during endoscopy. This is done either mechanically with clips or using a heat probe and often in conjunction with blood clotting injections. If this method fails surgery may be needed.

The treatment of varices is slightly different. Sometimes a balloon is inflated in the esophagus as a temporary measure. The bleeding is stemmed during endoscopy using tiny elastic bands to tie off the ruptured veins. If this band ligation does not work then shunts called TIPS may be used. The drug Terlipressin or similar is usually given to raise blood pressure, and a course of antibiotics is started.

The thought of having these tests can be scary and people also feel embarrassed but remember the medical staff are used to this kind of thing.

When they see or hear about black tarry diarrhea they don't think 'yuck!' they immediately think about what it could mean, what tests are needed and how they can help you get over your problem and in some cases save your life!

Don't Hesitate If You Have Black Diarrhea

So if you have black diarrhea, unless you have been gorging on black pudding or Guinness and feel perfectly well, then you have an urgent situation on your hands and should get help straight away.

The more quickly you act the more likely it is that you will have a happy outcome.

If you find yourself in this situation, then you are going to live through a few scary moments. Although it is hard to do, try and keep calm and get to the people who can sort you out. This is not a wait and see scenario.

If you feel well and suspect that the black color of your feces is caused by something you have ingested please see this article on black poop.

Whatever your problem turns out to be DiarrheaNurse wishes you a speedy recovery.