Crohn's Disease Symptoms - Could This Be Your Problem?

Crohn's disease symptoms can be very distressing but what is Crohn's disease? This disease is one of the inflammatory bowel diseases (IBD) and it has been diagnosed in 500,000 Americans. It is more common in people of European descent especially Scandinavians and people with Eastern European Jewish ancestry.

It can be difficult to diagnose as Crohn's disease can be similar to other inflammatory bowel diseases.

It is a long term condition that causes inflammation, swelling and irritation of any part of the gastrointestinal tract from the mouth to the anus, although the end part of the small intestine (the ileum) is the most often affected area. 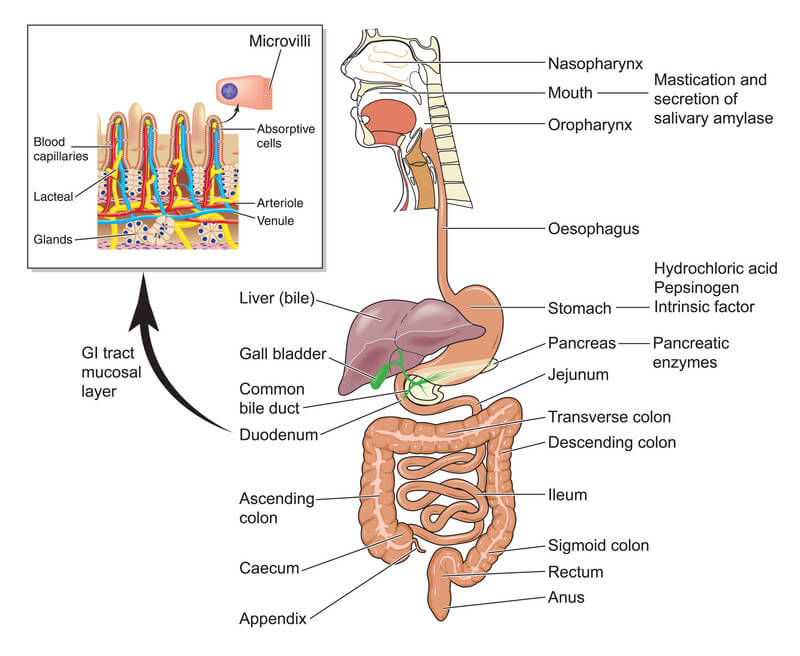 Diagram of the normal human intestinal tract from mouth to anus.

The inflammation reaches deep into all the layers of the intestinal wall and is patchy in nature with areas of normal tissue between the areas of inflammation.

The exact cause is not known but it is thought to involve an abnormal functioning of the immune system influenced by genetics and the environment.

Crohn's disease symptoms will differ from person to person depending which part of the intestinal tract is affected. Typically the severity of symptoms will fluctuate. Sometimes there will be a period of remission (a temporary recovery or lessening of symptoms) followed by flare ups.

Diarrhea is a defense mechanism used by the body to flush out things that it considers harmful and thereby lessen the chance of inflammation; it is therefore not a good idea to take anti-diarrhea medicines when you have Crohn’s disease symptoms.

Diarrhea in Crohn's disease is usually characterized by an increase in the number of stools passed during the day with a loose or watery nature.

The severity of the diarrhea will depend on how active the disease is but when it is very active 10-20 motions can be passed a day. The diarrhea will often, but not always, contain blood, pus and mucus. The weight of stools will be more than 200g (7 ounces) which is the upper limit for normal motions passed during a 24 hour period.

There is often urgency with a need to rush to the bathroom.

This symptom which has the medical name steatorrhea is caused by the poor absorption of fat.

Tenesmus is an intense often painful feeling of needing to defecate (pass a motion) but the rectum (back passage) is empty and so it is not possible to pass anything. Sometimes a little blood or mucus will be passed but no stool. This can be a very distressing symptom that may be constantly present or may come and go.

If you have this symptom you should see your doctor as although this is often a symptom of inflammatory bowel diseases and irritable bowel syndrome it can also be a sign of a space-occupying lesion or lump in the wall of the rectum.

Inflammation and ulceration can cause the walls of the intestines to become thickened and scarred making the passage of contents difficult. This leads to pain.

The location of the pain will depend on which area of the intestine is inflamed. As the whole tract can be affected pain can be felt in any area of the abdomen. For example if pain is felt in the upper abdomen this could be caused by inflammation of the esophagus as it enters the stomach or of the stomach lining.

The most common location for pain is the right iliac fossa which is an area of the abdomen on the lower right side just above the right leg. The pain is usually cramping and colicky in nature and tends to be worse after eating.

Weight loss is one of the common Crohn's disease symptoms due to diarrhea, vomiting and loss of appetite. In addition, people with this disease are often reluctant to eat as this might bring on their symptoms. In children a failure to grow and thrive is often a symptom which can point to a diagnosis.

Fatigue is one of the common Crohn's disease symptoms, with three-quarters of people in the active phase of the disease reporting high levels of tiredness. Of those in remission 30-40% still have problems with feeling tired.

Fatigue is made worse by difficulty in sleeping due to pain, anxiety and depression.

This symptom can have a major impact on people’s lives making it difficult for them to work and carry on their daily lives.

Fistulae can also form in other places such as between the bowel and the bladder or vagina.

These are cracks in the skin around the anus and can be very sore and painful.

Loss of blood from ulcers, fissures, fistulae, abnormal patches of the intestinal wall and low iron levels can lead to anemia which can result in tiredness, pale skin, a rapid heartbeat, dizziness and breathlessness.

These are clusters of inflammatory cells which can be found on colonoscopy (a test, using a tube with a camera on the end). 50%-70% of people with Crohn's disease will have granulomas and their presence can help with diagnosis as they do not occur in ulcerative colitis.

To find out more about how a colonoscopy test is performed see here.

Crohn's disease symptoms include nausea (feeling sick) and vomiting (being sick). Some people feel sick or vomit after eating but these symptoms along with pain and distension can also be a sign of obstruction of the intestine which is a medical emergency. This is more likely to happen in people with Crohn’s, as strictures and narrowing of the intestine are often present due to scar tissue.

Fever (raised temperature) 100oF/38oC or above. This is one of the fairly common Crohns's disease symptoms. A high fever may also be a sign of an acute infection such as an abscess which is a known complication of Crohn’s disease.

Not a lot of people realize that problems with your eyes can be one of the Crohn's disease symptoms.

I have this disease in my family and I know that Crohn's disease symptoms can have a huge impact on your life but with help and information the quality of your life can be greatly improved.

If you have read this article and are worried that you might have Crohn's disease please make an appointment with your doctor to discuss your concerns.

Be sure to contact your doctor if you have Crohn's disease symptoms especially if you have:

As you can see when trying to answer the question ' what is Crohn's disease ?' it is a very complicated and far ranging problem.

I have provided you with a list of symptoms to look out for and some of them are not what you might expect but Crohn's disease is so much more than this. It is a disease which can affect most aspects of your life and those around you.

DiarrheaNurse hopes that this information about Crohn's disease symptoms has been useful to you but do not hesitate to seek further help if you are at all concerned that you might have the symptoms mentioned above.