Coping with diabetes is hard on its own but is made even more difficult with this complication. People don't always know that diabetes and diarrhea can go together. Read on to find out about this distressing symptom, the causes, its symptoms and management. 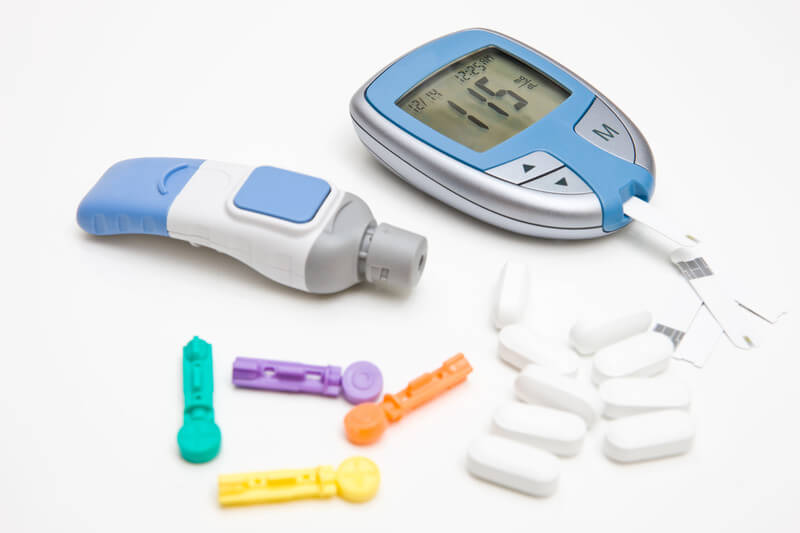 Autonomic neuropathy is the medical term for damage to the nerves that carry information from your brain to your glands and organs.

These nerves normally work to control organs like your bowel, bladder, heart and sexual organs without you being aware of it.

When diabetic diarrhea strikes it is because the nerves controlling your bowel have been damaged.

During the night our nervous system normally ensures that our bowels are quiet so that we can sleep but if the nerves are damaged then this does not happen and night time diarrhea can be the result. Nerves which control the sphincters allowing the passage of feces can also be damaged leading to incontinence.

This type of nerve damage is usually associated with type 1 diabetes and is more common if the diabetes is long standing and has been poorly controlled.

It is very rare in type 2 diabetes but it can happen especially if the person is an insulin dependent diabetic.

The incidence of this type of diarrhea is difficult to estimate as it is often confused with other types of diarrhea. Figures of 4-22% for people with type 1 diabetes but only 0.4% for type 2 have been given.

The first thing to note when managing diabetic diarrhea is that it is very important to get blood sugars well under control as this can help to reduce symptoms and to prevent further damage.

Treatment of the symptoms mainly takes the form of medication. Some experimentation is needed to see what works best for the individual.

The first things to try are anti-diarrheal medicines such as Lomotil and Immodium.

Bulking agents such as Citrucel, Metamucil and psyllium and high fiber foods can help as they make the stools more formed. You must drink plenty of fluids if your doctor recommends these as they can cause blockages if they are too dry.

Your doctor may prescribe anti-spasmodic medications such as hyoscyamine (Levsin) chordiazepoxide (Librax) and dicyclomine (Bentyl) which may help to reduce the number of times you open your bowels.

For more difficult cases clonidine and octreotide have been found to be useful.

Ramosetron has been found to be very effective at controlling diarrhea but is currently (2015) only available in Japan and some other Asian countries.

As this type of diarrhea usually happens with no warning and often at night it is important to protect bedding. Covers can be used to protect mattresses and incontinence pads may be needed. To feel more secure and lessen the worry that an accident might happen explore the use of the different types of protective underwear incorporating incontinence pads.

This type of diarrhea can take a great psychological toll as it is very hard to cope when you do not feel in control of your bodily functions and it can hugely restrict your lifestyle, especially as you are already coping with being diabetic.

If you are feeling depressed and finding it hard to cope with diabetic diarrhea then it is important to speak up and seek help.

Apart from the classic diabetic diarrhea there are other things which commonly cause diarrhea in those with diabetes. Small bowel bacterial overgrowth or SIBO is a recognized complication which studies have shown is more common when high levels of insulin are required.

The treatment is with antibiotics to reduce the numbers of bacteria and sometimes medications to speed up the transit time through the small bowel.

In severe cases hospital admission may be needed to replace fluids and improve nutrition.

Is it Bile Acids?

Bile is produced by the liver to aid digestion, particularly of fats. It has been found that some people with diabetes and diarrhea have higher levels of bile than normal in their colon. Normally 95% of bile is reabsorbed at the end of the small intestine and recirculated via the liver.

Nerve damage to the bowel caused by diabetes could speed up the transit time so the bile does not have time to be reabsorbed or overgrowth of bacteria in the small intestine could interfere with its reabsorption. This leads to bile acid malabsorption which causes diarrhea.

There has been some success treating bile acid diarrhea with bile acid sequestrant medications such as colestyramine, colestipol and colesevelam which are resins which bind to the bile lessening its effect.

Is Metformin Causing Your Diarrhea?

Metformin, a commonly prescribed medication to lower blood sugar and regulate diabetes is notorious for causing another type of 'diabetic diarrhea'. Consider whether this could be the cause of your problem.

Discuss with your physician the possibility of medication induced diarrhea but only change your regime in consultation with a professional.

Are Artificial Sweeteners to Blame?

Diabetes sufferers often rely on products with added artificial sweeteners in order to reduce their consumption of sugar and when they want a treat. One class of sweeteners called polyols can cause diarrhea if too much is consumed. These include:

Products incorporating these sweeteners are not recommended in Europe and the UK.

Do You Have Celiac Disease?

For reasons which are not clearly understood people with type 1 diabetes are more at risk of developing celiac disease than the general population.

This is an auto-immune disorder where antibodies are formed when the person eats foods containing gluten such as wheat and rye. These antibodies attack and damage the intestinal lining and cause many digestive symptoms including diarrhea.

If you have type 1 diabetes and are suffering from diarrhea it is important that you are tested for celiac disease.

Sometimes your symptoms can be improved by talking to the physician who manages your diabetes and adjusting your medication or improving your blood sugars but in most cases deciding what is causing your diabetic diarrhea can be complicated.

Tests should be done to exclude other causes of diarrhea not related to your diabetes.

As getting a definitive diagnosis can be tricky it is best to try and get referred to see a gastroenterologist if you have diabetes and diarrhea, especially one who specializes in these type of cases.

I have heard of people's concerns being dismissed by some doctors as they do not consider diarrhea to be something which is very important and dare I say it perhaps they do not think it very interesting or worth their while to investigate.

All forms of chronic diarrhea are very distressing to the sufferer but diabetic diarrhea is particularly upsetting as there is usually no sensation or warning that it is about to happen.

If you are diabetic and you are suffering with diarrhea insist that you are properly investigated; first of all to eliminate other illnesses and disorders and then to establish the extent of the damage and what can be done to alleviate the symptoms.

Diabetic diarrhea is a very difficult thing to live with and it is not often talked about but it deserves to be more high profile. Do not take no for an answer!

Diarrheanurse is dedicated to helping people find information about diarrhea, what could be causing it and solutions and treatment options. Please browse the site for other chronic diarrhea causes.

Return to Causes of Diarrhea from Diabetic Diarrhea