IBS Symptoms - The 7 Main Things to Look Out For

There are quite a few IBS symptoms and I should know as I have suffered from many of them over the years. However, it is important to know what to look for as some symptoms can be mistakenly put down to irritable bowel syndrome when in fact they are a sign of something more serious.

I am not playing down the impact that IBS can have on a person's life. The disruption that these symptoms can cause is truly difficult to deal with but it is good to know that it is not life threatening and does not lead on to anything more serious.

Read on to find out about the common and not so common symptoms and also  red flag symptoms which indicate that you may have something other than IBS.

IBS symptoms occur because the functioning of the bowel is disrupted but the exact cause is unknown. The large bowel becomes extra sensitive possibly due to over-activity of the nerves or muscles and symptoms of IBS are especially likely to occur after eating or when stressed.

The motility is affected so that the functioning of the large bowel either speeds up resulting in diarrhea or slows down resulting in constipation.

It is thought that there could be more than one cause and that in the future new labels may have to be given to different types when more is discovered about the origins of this distressing disorder.

It could also be that several different things have to be in place at one time for IBS to start such as genetic and environmental factors. Research is ongoing.

It is known that IBS symptoms are more likely to start after a bout of gastroenteritis (infectious diarrhea). There is a higher risk of suffering if you have a history of physical or sexual abuse and also if there is a history of IBS in your family.

What is known is that the structure of the bowel looks normal and even under a microscope no abnormalities can be seen. This is of no comfort to the 10-20% of the population that are affected by IBS though.

One line of research is looking an excess of bacteria growing in the small intestine where it should not really be (it mainly lives in the large intestine).

In May 2015 new research was published showing that people with IBS-Diarrhea or Mixed type, have antibodies to toxins produced by past gastrointestinal infections. This points to an organic cause for these types of IBS.

Your bowel habits will change from something which has been a regular pattern for you to a pattern which is not what you are used to. This could mean diarrhea or constipation.

In reality IBS symptoms are more individual than this and there is a spectrum but of course these loose categories can be useful when talking about what kind of disorder you have.

Changes in bowel habit can come and go and can be worse at times of stress. People can have their individual triggers and it is worth keeping a diary to note when your symptoms worsen. 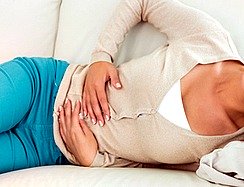 Pain is one of the main IBS symptoms and is often described as coming in waves or spasms like colic. The pain is often relieved when the bowels are opened or wind is passed.

In some studies it has been found that people who suffer from irritable bowel syndrome process pain in a different way and feel pain more intensely.

This is one of the IBS symptoms which people do not really know enough about to give it a name but it is very common.

It is a feeling that the rectum (back passage) is still full and you need to open your bowels when in fact there is nothing or very little there.

This happens when the nerves in the rectum become hypersensitive and so even tiny amounts of gas or stool send a message to the brain that you need to go. It can be very frustrating as you often feel like this after a bowel movement and for long periods of time when in fact your rectum is empty.

This is a common symptom in disorders where the rectum is inflamed like Crohn's disease but the trigger in IBS is unknown as the rectum is not inflamed.

If you have this symptom it is important to get a medical check as sometimes tenesmus can be caused by polyps or tumors in the rectum.

As we have already seen the stools in IBS can be diarrhea like with loose watery motions or hard and pellet like in cases where the predominant symptom is constipation. Sometimes mucus can be passed along with the stools but blood is never seen and would be a sign of something else.

Urgency is one of the IBS symptoms which is the most difficult to deal with. When urgency happens you have to open your bowels very quickly and get very little or no warning.

This means that accidents can happen and this is very distressing especially when diarrhea strikes.

It is common to get a morning rush where you have to dash to the toilet several times as soon as you get up and around breakfast time.

In the past I have been caught out on quite a few occasions and it is so embarrassing to feel that you have returned to a time in your life when you have not mastered potty training!

Having and passing more gas is one of the common IBS symptoms. Many people find this embarrassing and so have a tendency to restrict their lifestyles.

Due to excess gas the abdomen can become distended. This is one of the IBS symptoms which is more common if you are suffering from IBS-C as the gas can get trapped behind hard feces which is not moving along.

We have talked about the main IBS symptoms but some people suffer in other ways.

Anxiety and depression often accompany IBS. The reason is not clearly understood but it could be because of the stress of coping with this difficult disorder. Your life is disrupted making it difficult to live normally without worrying. It can be a vicious circle as the symptoms of IBS cause worry and anxiety which then go on to exacerbate the symptoms.

Growing research is showing a link between anxiety and depression and an imbalance in normal gut flora. Some early studies have even shown that treatment with probiotics can reduce levels of the stress hormone cortisol.

It is early days yet and more research needs to be done but this could become a new treatment for depression and anxiety.

There is an internationally agreed set of diagnostic criteria for doctors to follow when deciding if you have irritable bowel syndrome or not.  At the moment this is called Rome IV (as the conference is held in Rome and this is the fourth publication, 2016).

It is a system which has been developed and agreed by 23 different countries for diagnosing functional bowel disorders. Although from 2016 they are trying to move away from the word functional where they can as they now recognize that this word can be stigmatizing as some people think it means that there is nothing wrong! There is now a greater understanding of some of the disorders which come under this umbrella.

They now know that a person with a 'function' bowel disorder like IBS can suffer from these different things:

The diagnostic criterion for someone with IBS symptoms are abdominal pain for at least three days per month in the last three months with onset of the symptoms at least six months ago and in addition two or more of the following symptoms:

Is It Really Irritable Bowel Syndrome?

A diagnosis is made by the doctor after taking your history and assessing the symptoms that you have. There are some symptoms which will flag to the doctor that you could have something more serious than IBS.

If your IBS symptoms start after the age of 50 or you have a family history of colon cancer, inflammatory bowel disease or ovarian cancer then further investigation will be needed.

Be aware that there have been cases of misdiagnosis where irritable bowel syndrome is diagnosed because the symptoms fit and no red flag symptoms are present but in fact something else is going on.

I would have a discussion with your doctor about what other diagnoses could be appropriate before settling too quickly on a diagnosis of irritable bowel syndrome.

In some clinics it has been found that up to 30% of people who present with IBS symptoms actually have a long standing parasite infestation.

Parasites can hide out in the gut wall and the cecum (a pouch at the junction of the small and large intestine) and so can be difficult to detect with the standard test (parasite and ova exam) which looks for eggs and worms etc. in the stool down a microscope.This test has a lot of false negatives.

A newer test called PCR looks for parasite DNA and has a much higher success rate. This test is available privately in Europe from http://www.parasiet.com/en/parasites/order-parasite-test.html in The Netherlands and also in Australia from  http://nutripath.com.au/product/faecal-multiplex-pcr-test-stooltest-codes-2002/.

I do not currently (2017) know of a lab in the USA who offers this test as some labs that used to have it on their list no longer offer it. If you know of one please contact me.

It is never easy to be told that you have a diagnosis of irritable bowel syndrome as your life is usually significantly disrupted and there is always a fear that you live with every day that you will be embarrassed in public by symptoms of IBS that you cannot control.

This article has highlighted the main IBS symptoms and other signs which should alert you that irritable bowel syndrome is not your problem.

Doctors are taught not to over-investigate and up to a point this is right because nobody wants to have unnecessary tests but I would push to have at least some basic tests done such as an abdominal and rectal examination and blood and stool tests.

If you are older than 50 at the onset of symptoms or your family has a history of bowel diseases then a colonoscopy would be indicated.

For those of you living with IBS symptoms every day you have my greatest sympathy. I lived for years in this way and it caused me to restrict my life as I was afraid that I would have sudden diarrhea when in a public place, which did happen to me on several occasions. I will be writing another article about how I got my symptoms under control, in fact I practically eliminated them and got my life back!

It's here! Please see below for more information about IBS including 21 IBS Treatment Options or How I Got My Life Back!