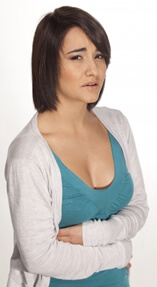 Inflammatory bowel disease or IBD is not a single disease but a group of disorders that result in the intestinal tract becoming inflamed (red and swollen). The two most common types of IBD are Crohn's Disease or CD and Ulcerative Colitis or UC.

Crohn’s disease affects any part of the digestive tract from the mouth to the anus, although the small intestine and the colon are the most commonly affected and the inflammation will usually go through all layers of the intestinal wall.

Crohn’s is patchy and there will be areas of healthy tissue next to areas of inflammation which are known as skip lesions.

Ulcerative colitis only affects the colon (large intestine) and is confined to the top layer of tissue which is in contact with the stools passing through. There are other, much rarer, types of Inflammatory bowel disease called collangenous and lymphocytic colitis which together are often called microscopic colitis.

Inflammatory bowel disease should not be confused with IBS or Irritable Bowel Syndrome which can have some similar symptoms but does not cause any inflammation.

Who Is At Risk?

You are more at risk of suffering from inflammatory bowel disease if:

It is not possible to prevent IBD because at the moment doctors do not know what causes it.

Whether it is caused by Crohn’s disease or ulcerative colitis, the symptoms of inflammatory bowel disease wax or wane depending upon the severity of the condition. You may experience a sudden flare-up of the symptoms when the disease is in the active stage and there is a severe inflammation. When it is in remission, the degree of inflammation will be greatly reduced and you may not experience any symptoms at all.

The severity of the symptoms also depends upon which part of the digestive tract is involved.
Some of the most common symptoms associated with inflammatory bowel disease include:

Other problems associated with IBD are:

Some of these problems happen because of poor absorption of nutrients by the inflamed intestines and some because of inflammation elsewhere in the body. Some will clear up when the IBD improves but some will need separate treatment.

Not everybody has all of these symptoms and two people with the same condition can experience it in a very different way, making these diseases difficult to diagnose. (See tests for IBD)

Despite extensive ongoing research, there is no conclusive proof as to what causes inflammatory bowel disease.  It is thought to be due to some unknown agent or multiple agents in the environment which in susceptible individuals causes the immune system to attack the healthy tissue in the intestinal tract leading to an inflammatory reaction.

If left untreated, this inflammatory reaction persists, damaging the intestinal wall and resulting in abdominal pain and diarrhea.

In very severe cases, which are left untreated, you could suffer intestinal complications such as:

The risk of colon cancer is higher in people who have inflammatory bowel disease, especially in those who have it severely. The risk starts to get higher than normal after having IBD for 8-10 years. From this time onwards regular checks should be done by your doctor.

This normally means having a biopsy taken during a colonoscopy (a look into the large intestine using a flexible tube with a camera on the end) every one to two years. It is much easier to treat and cure a cancer when it is found early.

If you have any of the above mentioned symptoms of inflammatory bowel disease, it is important to visit your doctor as soon as possible so tests can be carried out to confirm the condition and rule out any other disease. This is because some of the symptoms are common to several other conditions as well. 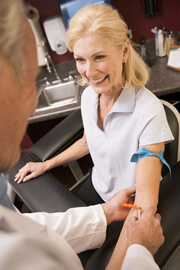 Your doctor will use a combination of a physical examination, your health history, and tests to work out if you have inflammatory bowel disease and if so, which kind.

Tests used in the diagnosis of IBD include:

Treatment of inflammatory bowel disease is aimed at alleviating the symptoms and will typically include medication prescribed by your specialist doctor such as corticosteroids, antibiotics and immunosuppressants. Sometimes in severe cases surgery will be required.

Foods do not cause IBD but they can aggravate the symptoms. Sufferers need to experiment with their diet on an individual basis but things which often help are limiting dairy products, reducing fiber, reducing gas-producing foods like beans and eating little and often.

Stress does not cause IBD but it is thought to be a contributory factor in the timing of flare ups, so stress reduction measures are always recommended.

Many people hesitate to seek treatment because they are embarrassed to discuss their symptoms. However, without treatment these diseases can lead to other complications. Timely treatment is crucial. Do not be embarrassed. For healthcare professionals talking about such symptoms is part of their working life and they are used to hearing about such things.

I know that many people do not like to talk about bodily functions but be assured that health care professionals are used to this. At home, with one nurse, one veterinarian and one occupational therapist our talk is somewhat uninhibited around the dinner table.

Many times in the past when we have had guests, a sudden silence has reminded us that our everyday conversation is perhaps not what people expect!

I hope this information about inflammatory bowel disease has been helpful to you, if you need to know more about chronic diarrhea then please browse the site and see related pages below.