10 Irritable Bowel Syndrome Symptoms That May Surprise You

Some of these symptoms are genuinely associated with IBS but do not just make assumptions, as they could point to other problems.  Of course it is quite possible to be suffering from more than one thing at a time.

Read on to discover some of the less common irritable bowel symptoms.

One of the uncommon irritable bowel syndrome symptoms which is not much talked about is back pain, particularly lower back pain. This is probably referred pain. Pain which has its origin in the large bowel is being felt in the back.

It is a well-known phenomenon that pain can be felt in a different part of the body from its origin. This type of lower back pain can radiate round to the flank and then to the abdomen.

Of course do not automatically assume that your lower back pain is caused by your IBS. It could have other causes so please see your doctor.

Irritable bowel syndrome symptoms can disrupt anybody’s sex life as it is difficult to feel in the mood when you are in pain and having to rush to the toilet.

People also often feel embarrassed about taking part in sexual activity if they are passing lots of gas or have noisy, gurgling bowels. However, if you actually suffer pain during or after sex this is called dyspareunia.

As the bowel and the vagina are in close proximity it is normal and common for the bowel to be joggled about during sex with no problems but if the bowel is sensitive as it is in IBS, then pain can result.

Of course your pain could have other causes such as infection, scar tissue and endometriosis among other things.

It has been found that about 40% of women and 30% of men with IBS report having nausea. The feeling of sickness is often there in the morning upon waking.

The reason behind this is not known but it may be secondary to pain. Pain is often associated with nausea.

It is uncommon to experience actual vomiting but this has been known. Nausea and vomiting are normally harmless but you should not just assume that they are one of your irritable bowel syndrome symptoms. They could also be a sign of other things, such as bowel obstruction.

One of the irritable bowel syndrome symptoms which some people suffer from is tiredness or fatigue. This is not the normal tiredness that you would feel if you have been over doing things a bit but an all-enveloping feeling of exhaustion.

It is not clearly understood why but there seems to be an overlap between IBS and chronic fatigue syndrome with some people suffering from both things at the same time.

Both conditions are known as post-infectious syndromes. In other words you are more likely to develop them if you have suffered from a past infection, especially a gastrointestinal one. This could therefore be the link between them.

If you are chronically tired you should ask to have some tests done as you could be suffering from other causes of fatigue like anemia.

Some recent research has also shown that people who suffer from insomnia or disturbed sleep are more likely to have irritable bowel syndrome symptoms the next day, especially pain.

Getting treatment for sleep problems may help.

This irritable bowel symptom is also known as early satiety. It can make it difficult to eat a nutritious diet as after eating only small amounts of food, you will feel full.

Heartburn is caused by acid reflux, where acid from the stomach leaks up into the esophagus (gullet) causing a burning chest pain, often after eating. You can also have an unpleasant taste in the mouth caused by the acid.

Although occasional acid reflux is normal if you have it regularly it could be one of your irritable bowel syndrome symptoms.

There is a recognized overlap between gastroesophageal reflux disease and IBS. If you are diagnosed with one of these disorders you are more likely to go on and develop the other one.

If you have frequent heartburn then please see your doctor for a diagnosis and treatment. 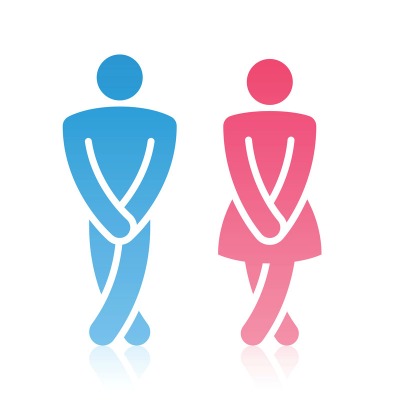 Sometimes urge incontinence is present (passing a little bit of urine before reaching the toilet) and often there is a need to get up in the night to pass water (nocturia). There is no infection present.

A study in Japan showed that about a third of people diagnosed with overactive bladder syndrome also have IBS. There seems to be a degree of overlap between these two conditions which are both characterized by irritability but the exact reason is not yet understood.

Do get tested to make sure that you do not have an infection or other cause for your bladder problems.

Some people with IBS seem to suffer more than average with headaches or migraine.

Some evidence seems to be emerging to support the theory that the possible the link between these two things is that after experiencing threatening adverse events (e.g. gastrointestinal infection) the nervous system creates a state of hyper-vigilance.

It will therefore overact to what it sees as the slightest threat. It is a bit like a security guard who has already been attacked once, reacting to every little sound that they hear.

Another little talked about irritable bowel syndrome symptom is muscle pain and yes you have guessed it there is another overlap coming up.

Between 30% and 70% of people diagnosed with fibromyalgia (5 million in the US) also have the symptoms of IBS.

It has been found that 60% of people with this pain disorder of the joint connecting the jaw to the temporal bones of the skull also have IBS and other symptoms of irritable bowel syndrome.

This article seems to have been full of doom and gloom with links being pointed out between IBS and many other disorders and syndromes.

If it is not bad enough that you have IBS, your list of irritable bowel syndrome symptoms could now be even longer and be linked with chronic fatigue syndrome or overactive bladder syndrome!

The up side is that although information is patchy at the moment, through ongoing research into all these different conditions we may one day untangle the links and causes that could lead to a much better understanding of irritable bowel syndrome and how to help.

In fact some doctors and scientists think that changes in the gut nerves could be the root cause of many different conditions, even so called psychological ones, as it is now realized that the gastrointestinal tract has its own nervous system which functions independently of the brain.

It can send messages which influence the brain. Professor Michael Gershon of Columbia University New York calls it our second brain.

Then there is the question of our microbiota, the 100 trillion or so microorganisms that live in our gut, on our skin and elsewhere in our bodies. It is now being realized that if this is unbalanced it can impact on many different aspects of our health.

DiarrheaNurse will continue to monitor developments in these new and exciting fields and bring you news of new discoveries like the new ibschek blood test just developed in May 2015.

It goes without saying that if you have one or more of these less common irritable bowel syndrome symptoms then do not just assume that it is associated with your IBS please get checked by a doctor to make sure that it is not caused by something else.

If you have chronic diarrhea then please browse this site for more information, for example, 8 Common Chronic Diarrhea Causes.

For more information about symptoms of irritable bowel syndrome and treatment please see below: